Along with the more mundane posts of answering questions and sharing information about Carina, I wanted to bring you along on my journey. Not only was Monday the official announcement of Carina Press, but it was also my first day as an official employee of Carina/Harlequin. Though I had been working with the digital team in the weeks preceding, it was purely in a consulting manner and more along the lines of them picking my brain (after my trip to Toronto, I was quite sure I had nothing left to share after a lengthy question and answer session with the team!)

No longer having to keep the secret of Carina’s existence was the best part of the week. Do you have any idea how hard it is to not tell people such exciting news for weeks (and months?). When I flew to Toronto, I couldn’t Twitter or blog about my adventures, couldn’t share the coolness of visiting the Harlequin offices (all those books! And the Harlequin artwork! So cool), meeting the digital team, seeing Bobble Brent in person, and fessing up about just where I saw that Buggati Veyron. Not to mention that during all those weeks, I was still attending writers’ conferences and the sheer number of people who asked me how I was doing, what I was going to do next and if I had a job yet was almost overwhelming. But through all of those lunches, drinks, dinners, meetings and the workshops I gave, I couldn’t breathe a single word to anyone about what was coming. I deserve some sort of metal for holding out against that kind of pressure, don’t you think?

Yep, last week, finally sharing the news, was amazing. And the sheer amount of support and goodwill sent our way? No other word than wow will sum it up. But, alas, it’s not all glamour and glitz, this publishing business :P There was actual work involved last week. I’m fairly sure I generated more email and logged more phone time in that one week than I had in the entire month previous. Not to mention all the time spent visiting blogs, forums and Twitter answering questions and sending out thank yous. Maybe it’s most amazing that I didn’t develop carpal tunnel last week.

In addition to all that, I’ve been doing paperwork. And reading policies and procedures. I know, I know, you’re all jealous. But here, let me show you the packet of information I received this week compliments of human resources. 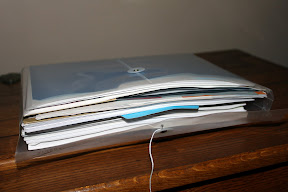 I swear to you, it’s four inches thick!

And even with all the excitement of a new job, there’s still the other side, the learning curve. The other members of the Carina Press team have all been with Harlequin for years (some of them 20+ years), they all work in the Toronto office together (I’m working from home, which is such a bonus!), just feet from each other, and other than Malle, I’ve only met them once. So they all have established roles, understand the ropes and are well familiar with both Harlequin and each other. I’m the new kid on the block, which is always both exciting and fraught with nerves and no small amount of trepidation. Just learning the new email system is hard, let alone the aforementioned policies and procedures! And we won’t talk about trying to get my Mac to play nice with the Harlequin system!

So last week and these upcoming weeks are for learning about my role in Carina Press, the duties I’ll have and how I fit into the team. They’ll also be for reading submissions (holy cow, the submissions!), contracting books, gathering an editorial staff, setting up a style guide, assembling an author welcome packet and making lists of my lists of things to do, accomplish and put together. Even with a company that’s going to be utilizing some existing backend workflow, there’s still a lot to be done, more little details than we ever realize that need to be covered, and always more questions and ideas popping up. It’s an exciting and busy time, and I wouldn’t choose to be anywhere else!

29 thoughts on “Week One…Learning the Ropes”