Tic-Tok of Oz, or What Turned Me on to Robots 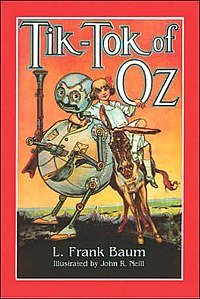 Mechanical people fire our imagination from I Robot to the Stepford Wives. The concept of what it means to be human and whether synthetic life forms can develop humanity was explored in great depth in Battlestar Galactica. Is the quality of humanity judged by the ability to reason or is it necessary to feel emotions? If a created being develops emotions such as love, does it also require a certain spark—call it the soul—to be more than a replicant?

When I was a child, I avidly read whichever books from the Oz series I could get my hands on from the early Frank Baum books through the continuation of the series by Ruth Plumly Thompson. Tik-Tok of Oz was a mechanical man who was rather cold at the beginning of his story but developed personality through interaction with humans. What does this have to do with my steampunk novella Like Clockwork? Reading about Tik-Tok as a child started a lifelong fascination with synthetic life forms and the question of where humanity truly lies.

Like Clockwork is a tale of murder, mayhem, espionage, inventions, romance and steam. The range of possibilities for what can be included under the steampunk umbrella is ever increasing. I chose to write a tale with no paranormal elements, only a new invention that rocks the society into which it is introduced. I hope readers enjoy it. 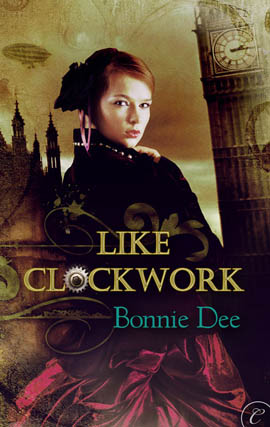 Victoria’s work with automatons has gained her renown and changed the face of London. But her concern that the clockworks are taking too many jobs away from humans, creating social unrest, is ignored. Given the ugly mood of the underclass, she fears more outbreaks of violence similar to the murder spree of the notorious Southwark Slasher.

Dash, unemployed thanks to the clockworks, has pledged fealty to The Brotherhood, a group determined to bring about the downfall of the automatons by any means necessary. His plan to kidnap Victoria goes awry when the unorthodox scientist pledges her assistance to their cause.

Despite their opposite social classes, a bond grows between them, and Victoria begins to feel emotions she never expected for the passionate Dash. But when the Slasher strikes close to home, Dash and Victoria realize that the boundaries of polite society are far from the only threat to their happiness…

« Celebrate steampunk…
The Way It Should Have Been… »

8 thoughts on “Tic-Tok of Oz, or What Turned Me on to Robots”