Exploring the “Dark Edge of Honor” 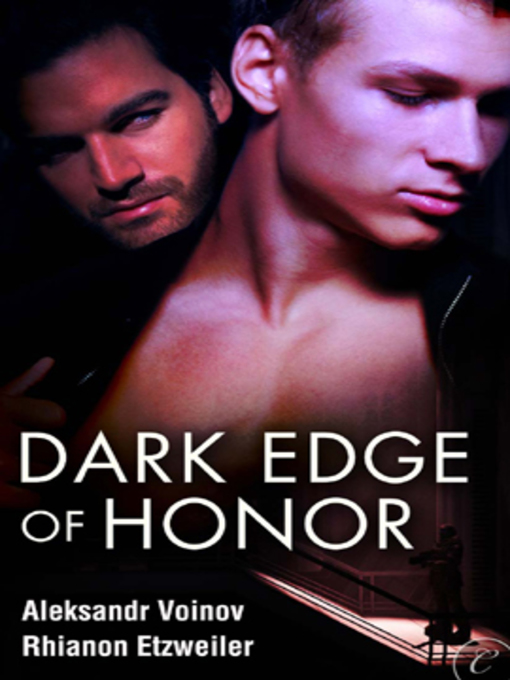 Sergei Stolkov is a faithful officer, though his deepest desires go against the Doctrine. A captain with the invading Coalition forces, he believes that self-sacrifice is the most heroic act and his own needs are only valid if they serve the state.

Mike, an operative planted within Cirokko’s rebels, has been ordered to seduce Sergei and pry from him the Coalition’s military secrets. His mission is a success, but as he captures Sergei’s heart, Mike is tempted by his own charade and falls in love.

When the hostile natives of the planet Cirokko make their move, all seems lost. Can Mike and Sergei survive when the Coalition’s internal affairs division takes an interest in what happened in the dusty mountains of Zasidka Pass…?

The premise behind the romance in Dark Edge of Honor isn’t new—falling in love with an enemy soldier is one thing, as a civilian. It’s another entirely as a soldier. Exploring the dynamic of loyalties and ethics between two well-honed professionals takes the reader on an intense roller coaster ride of a journey. It gives the characters common ground and mutual understanding, but it also leaves the door wide open for tension and conflict. Never a dull moment, certainly.

Far from being “just” lovers, Sergei and Mike are seemingly up against impossible odds. Not only does their romance begin as seduction and mutual attraction – the mutual desire has to mature quickly to have any chance of survival against those who’d consider Sergei a traitor and execute Mike as an enemy infiltrator. But both men battle even bigger demons; their background, their lives, their whole past is on the line. Everything that defines them and everything they fought for.

This full-length military science fiction novel began its life in July of 2010 on the internet. Google Docs, to be precise. Rhi and Aleks did tandem writing sessions three to five days a week, churning out between three and five thousand words a session.
Rhi found it difficult to get inside Mike’s head, at first. His character was inspired by a number of various military personnel, none of which were known for their intimately engaging demeanors. She ended up writing a number of stream-of-conscious vignettes, digging around in his past, before things clicked into place. Those pieces are now available as free content on her website.

Aleks kept remembering all the rules of romance writing – and one of them is that the heroes need to have admirable qualities. Neither a spy nor a traitor is really “admirable”. They deceive people, often with disastrous consequences. In a military context, people die. Part of what Aleks wanted to explore was – under which circumstances is treason forgivable. Is love enough? Can suffering pay the debt? What are these things that define us as traitors or heroes?

That, really, is the “dark edge” in the idea of “honor”. Share the journey with Mike and Sergei. Get your copy here.

About the Authors:
Aleksandr Voinov is an emigrant German author living near London. Originally, he studied medieval history with a focus on military history, but he then moved to London, where he works as a financial journalist, dealing daily with the feudal lords of the modern age. His professor would be proud—or horrified—if he knew.
His genres range from horror, science fiction, cyberpunk and fantasy to contemporary, thriller and historical erotic gay novels. In his spare time, he goes weight lifting, explores historical sites or meets other writers. He single-handedly sustains three London bookstores with his ever-changing research projects and interests. His current interests include bonsai, tailored suits, chess competitions, World War II, Afghan history, Roman emperors and Russian oligarchs. He loves traveling, action movies, spy novels and ponders taking up boxing.
Visit Aleksandr’s website at https://www.aleksandrvoinov.com and his blog at aleksandrvoinov.blogspot.com.

Rhianon Etzweiler spent her formative years seeped in military culture, and many of her writing inspirations bear that mark – with a definitive twist. Her main genres are science fiction and fantasy, but she enjoys spicing things up with a speculative mixture that sometimes defies an easy label.
Next to Elizabeth Moon and Meredith Ann Pierce, she still counts Jane’s Defense and Popular Science among her influences. “I read articles about cutting edge technology and science, and wondered what impact it would have on society and culture. How we would change, evolve as a species, as a result.”
Visit Rhianon’s website at https://www.rhianonetzweiler.com for links to her blogs and other content.

2 thoughts on “Exploring the “Dark Edge of Honor””