Men Under the Mistletoe – Christmas Yet To Come

If you’ve already read the stories in Men Under the Mistletoe, you know that there are happy endings ahead for some lovely lads this year. But what about next year? Will the magic of Christmas last or will it melt away with the spring and the return to regular life? We thought it would be fun to take a peek at what our characters are doing come next holiday season. 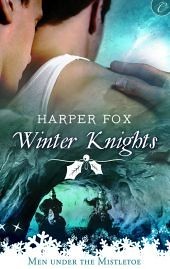 Harper Fox:
It’s great to be part of Carina’s M/M holiday anthology again this year, and I loved writing my contribution, Winter Knights. My first topic for today’s blog – where will your heroes be this time next year – is an interesting one for me, because it sends me deep into “what happens after happy-ever-after” territory, and I really like that. It kills me to part with my protags at the end of a novel, and I welcome the chance of a speculative return visit! And I’ve got a little competition challenge for you too, details at the end of this post.

Gavin and Piers got their HEA after a short but very intense struggle. They’d been together for three years at the opening of Winter Knights. Gavin had created a world in his head where everything was okay in their relationship, and it took the shock of Piers breaking up with him to make him re-evaluate. So I left them at the end of the story passionately reconciled, but with a whole world of loving work to do. They were definitely just at the end of their beginning.

Christmas 2012 sees Gavin and Piers again in the snow up near Hadrian’s Wall. They won’t be staying in the dreadful backpacker’s hostel this time – no need for that; Gavin’s new theories in Arthurian folklore will be selling his latest book like hot cakes, and as for Piers, his compassionate nature and struggles with his own religious beliefs will have led him to a counselling post at a Catholic seminary. So materially they’re flourishing, and as far as their romance goes, they’re about as close as two such wildly different men can get. I reckon they’ll have spent a whole year arguing, adoring one another, having hot sex with and without the aid of love beads, and sitting up all night in ferocious debate about all those issues they kept locked up for their first three years. So they’ll have taken a room in a really nice Northumbrian hotel, and I’m not at all sure I’d want the room next door.

This year they’re doing the full romantic thing, and it’s Piers who’s fearlessly booked the double room and given stare for bold stare to the desk clerk who might have liked to make something of it. (You’d think there’d be no need in this day and age, but sadly around here you’d still get the odd surprise.) It’s an important anniversary for him and Gav. They’re getting everything right they got wrong before, and Gavin is on a pilgrimage. Last year at this time something extraordinary happened to him up here among these hills. He found out the benefits of having a man of faith as a partner when Piers believed unquestioningly in him, but all through this past year he’s thought about his encounter with the ghosts of Hallow Hill. And Piers has suggested that they walk up onto Sewingshields Crag late at night on Christmas Eve, just to see what will happen.

Nothing does, of course. They’re a bit shamefaced, wandering about through the snowdrifts, looking for an entrance into a magical cavern in the earth. But at least they’re together this time, and properly equipped with food and a nice hipflask. They find a sheltered spot among the rocks and one thing leads to another, as it generally does with these two extended honeymooners. They curl up together and talk for hours, about everything they’ve been through, Gavin’s fears about a recurrence of illness, the prospect of maybe one day adopting a kid. It’s a magical night, but only in a very earthly, human way, and Gavin is certain that the double set of hoof prints he sees freshly made in the snow on the way back to their hotel is probably only a pair of riders out to enjoy the Christmas dawn. Probably…

So, about this competition! Gavin didn’t do too well with his Christmas gift to Piers in Winter Knights. An engagement ring and a sex toy sent mixed messages, I would say. Do you reckon he did any better the year after? What do you think the long-suffering, lovely Piers should get in 2012? It would be my pleasure to send an ebook from my backlist – Life After Joe, Driftwood, The Salisbury Key, Nine Lights Over Edinburgh, Last Line, A Midwinter Prince or Winter Knights – to anyone who comes up with the best idea, and these will be judged on… er… the one I like best. Whichever makes me smile most, or touches me, or makes me snort with laughter. Further, I faithfully promise that if I ever write a sequel to Winter Knights, and I’d love to do it, I will include your suggestion!

I’m sure you’ll love reading about what the guys from Josh, Ava and KA’s books will be up to this time next year, so check out our other great Men Under The Mistletoe holiday anthology blogs, and all the best for a wonderful festive season to you all.

A cup of Kona coffee steamed on the table on the balcony, the rising sun turned the waves into a million diamonds, and Bryce’s arms slid around my waist as he rested his chin on my shoulder. It was a perfect morning. Beautiful. My schedule for the day consisted of tanning, brunch, a surfing lesson and a Catamaran cruise. And my stomach had more knots than a third grader’s attempt at a macramé snowman because it was so horribly wrong it was for December twenty-third.

“So. Your first Christmas off. What do you think?” Bryce stepped away, slurping his own coffee.

A year ago, I would have sworn I’d give anything to find myself somewhere but the tiny Pennsylvania valley that held my family’s tree farm. In fact, last year I’d had my whole escape to St. Thomas planned out. But I couldn’t seem to get in the spirit of Mele Kalikimaka, despite the battery operated Christmas lights Bryce had hung on the headboard in our suite at the Kahala Resort. It was just wrong.

I turned away from the sparkling ocean and sand, thinking of the frozen slush I’d be facing at home and pasted on a smile. “It’s amazing. Thank you.”

Bryce smiled back, then stared like he was reading the thought bubble he always claimed popped up over my head. He sighed, shaking his head. “I’ll call the airline and get us a flight back. You realize we’ll probably end up snowed in in Chicago.” 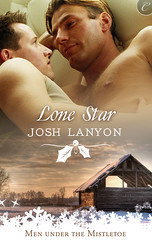 Josh Lanyon:
When we last left Web and Mitch in Lone Star, Mitch had a decision to make regarding the guest artist role with Les Grands Ballets Canadiens de Montréal. Web isn’t sure they can survive a long distance relationship. It’s never an easy situation, and to compound matters, Mitch is both highly ambitious and at the peak of his career. It’s a lot to ask someone to give up everything they’ve worked for.

Mitch admits he’s not sure a long distance relationship is a great idea either, but he badly wants the role of the Swan in Bourne’s Swan Lake. In any case, he can’t just up and quit, he has a contract with American Ballet Theater and he doesn’t want to jeopardize his entire future in ballet — nor does Web want him to. They’re both trying to be very logical but, having lost ten years, the idea of further separation is excruciating. They go back and forth, but in the end Mitch decides to take the guest artist role in Canada and he flies back to New York on New Year’s Day.

But this time it’s different. They’re not boys, they’re men and they’ve both learned the hard way that a healthy relationship takes work. Work as in patience, understanding, and commitment. They talk every night on the phone, no matter how late. And when spring comes and Mitch is dancing with Les Grands Ballets Canadiens de Montréal, Web takes his vacation and spends his two weeks in Montreal.

By the time December rolls around again, Mitch has packed up his New York brownstone, and negotiated his way out of his ABT contract. He’s agreed to act as lead instructor and liaison for the summer training course held by ABT in conjunction with the University of Texas in Austin. And he’s joined Austin Ballet Company as a principle dancer. He dances in the Nutcracker all season to great acclaim and sold out audiences. There’s something to be said for being a big fish in a little pond.

Meanwhile Web has moved out of the family homestead and into the Evans’ ranch and when he’s not working, he’s overseeing the renovations he and Mitchell have planned which include a dance studio for Mitch.

There are no performances scheduled on either Christmas Eve or Christmas Day. Mitch and Web spend Christmas Eve with Web’s folks, but Christmas Day is spent together on their own. They sleep late, have breakfast in bed, sleep some more, and then finally **open presents beside their first Christmas tree. Later they prepare their Christmas feast together and both eat until they’re ready to explode. In the evening they take a long walk beneath the frosty bright stars, and when the wind rustles the brush, Web reminds Mitchell about the reindeer he thought he saw the previous year. Their laughter turns to kisses and they return to the house, holding hands and still smiling.

(**In the comment section tell me what presents Mitch and Web gave each other Christmas morning, and whoever I pick as coming up with my absolute favorite choice may pick any ebook from my backlist.) 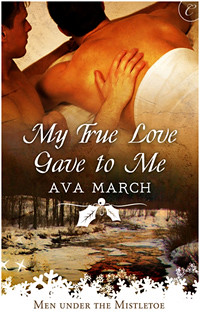 With My True Love Gave to Me, it feels rather odd to think of a Christmas yet-to-come. Thomas and Alexander’s next Christmas is almost two hundred years ago, but to them, 1823 is ‘next Christmas’. Since it’s the past for us, I can tell you exactly how they spent their holiday as it’s already happened (the space-time continuum aside, I can also impart this little bit of info because, well, I’m their author and therefore their next Christmas went exactly how I say it went…or will go, depending on how you look at it).

Last Christmas, Thomas replaced Alexander’s dark memories of the holidays with a new one filled with hope and love. And next Christmas Eve, they go back to the place where the pain and heartbreak began, back to Alexander’s father’s hunting lodge in the country. A night together, a morning together, and a simple Christmas dinner. Just the two of them. And Christmas becomes Alexander’s favorite time of year.

18 thoughts on “Men Under the Mistletoe – Christmas Yet To Come”