By Shirley Wells, Janni Nell, Julie Moffett and Robert Appleton (each will answer four questions…and only four…under pain of death)

Stay tuned for a giveaway contest at the end.
To help celebrate this second anniversary, and to showcase the variety of stories published at Carina Press, Angela James and Deb Nemeth invited the four of us to represent our respective genres in a non-romance anthology. Oh, and each novella was to be a part of its author’s existing series. Need we list the million and one ways in which that news doesn’t suck for an author. Edited by Deb herself—one of the most brilliant and intuitive editors out there—the resulting stories overflow with our enthusiasm for not only our characters and world-building, but for the very ethos of Carina itself: making sure “no great story goes untold,” no matter how unusual. Seriously, we wouldn’t be here otherwise.
So it’s with deep appreciation that we introduce, for your reading pleasure, 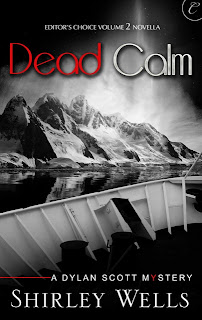 Detective Dylan Scott thinks cruising well above the Arctic Circle in November is nothing short of madness. He has zero interest in seeing the elusive aurora borealis, but agrees to the Norwegian holiday to keep his wife and mother happy. At least the biggest problem he’ll have to deal with is boredom. But that boredom quickly dissipates when the unpleasant elderly woman in the neighboring cabin is found dead.
Everyone thinks Hanna Larsen had a heart attack. Everyone except Dylan. Dylan is convinced there’s a killer aboard the Midnight Sun — a killer who may strike again…

Shirley, what do you like best about writing a series?
I love the idea of meeting up with old friends. I feel the same way about writing a series as I do about parties. It’s great to meet new, interesting people but nothing quite compares to the thrill of seeing a dear friend walk in the room.
Who is your main character?
Ex-cop turned private investigator, Dylan Scott. He’s a chauvinist and a terrible husband, but he possesses a dogged persistence and his big heart is in the right place.
If you could meet one of your characters, who would it be and why?
It would have to be Dylan. He drives my dream car, a classic Morgan, and he believes women should be banned from the roads. I’d love to take his Morgan for a spin – although it might put him at risk of a cardiac arrest.
Which character do you love to hate?
That would probably be Bev, Dylan’s wife. I feel for her because it can’t be easy putting up with Dylan, but there are times when I long to slap her for not appreciating just how lucky she is.
***
DANCE OF FLAMES by Janni Nell 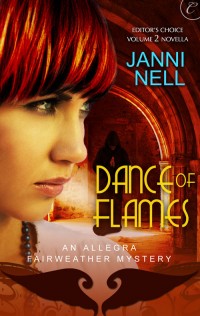 Family vacations fill me with horror–and for a woman who makes her living as a paranormal investigator, that’s saying a lot. Still, I couldn’t turn down a month in sunny Spain and the chance of flamenco lessons with Casper, my gorgeous guardian angel–even if it did mean sharing a villa with my mother.
But it’s true what they say, there’s no rest for the wicked. We’d barely unpacked when the maid started having dreams of being tortured on the rack–dreams my intuition tells me are something more than your average terrifying nightmare. After all, we are in the land of the infamous inquisition, and she does have those unexplained marks…
So for now my dance partner’s going to have to wait for me to get to the bottom of this mystery, and when I do, I plan to send evil packing.
21,000 words

Janni, what do you like best about writing a series?
I fell in love with Allegra and Casper. One book just wasn’t enough. It’s great to revisit these characters and add to their adventures. Even better to watch how their relationship develops over a number of books.
Who is your main character?
Allegra Fairweather began paranormal investigating in high school as a favour to friends. Demand for her services gave her the confidence to become professional. Her conservative mom and stepdad were horrified. Her guardian angel, Casper, prepared for a bumpy ride.
If you could meet one of your characters who would it be and why?
Allegra’s best friend, Wanda Appleseed, is bright, bubbly and a trainee witch. She’d be great fun to hang out with.
Which character do you love to hate?
Allegra’s step-grandfather, Steven Richard Hampton XXXI. He’s rich, mean and condescending. He makes no effort to conceal his sense of superiority and disapproval of Allegra. Let’s just say he got what he deserved in South of Salem.
***

NO MONEY DOWN by Julie Moffett 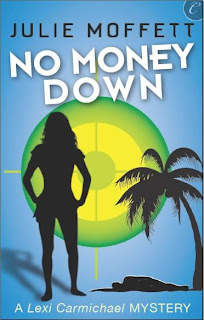 Description:
Me and the legendary Zimmerman twins–it’s a friendship made in geek heaven. And it all started back when I worked for the NSA…

My best friend Basia dragged me to the beach for her idea of a vacation. All those annoying people, sand in embarrassing places–not exactly R & R for a girl who doesn’t like the sun, the ocean or bathing suits. I couldn’t wait to get back to work.

Julie, what do you like best about writing a series?
I think the best part of writing a series is the chance to visit and re-visit your characters over and over again. They do become a family of sorts. I enjoying helping them grow and develop in ways that real people do.
Who is your main character?
Lexi Carmichael is a twenty-five-year-old geek extraordinaire. As a child, she excelled in all sorts of math and now she works as a computer techie for the National Security Agency. A disappointment to her gorgeous mother, a former Miss Virginia Colonial Blossom, Lexi has ordinary looks and not-so-brilliant social skills to go with her super-charge brain. Her biggest thrills in life are doing the daily crossword puzzle in the Washington Post and a long-standing addiction to everything to do with Dunkin’ Donuts.
If you could meet one of your characters who would it be and why?
Oh, I’m sure Lexi and I would have a blast eating cookie dough ice cream and chocolate éclairs for dinner. But a dinner with Slash would be eventful to say the least. A good Italian wine, some spicy pasta and all while playing a game of strip poker. Hmmm…
How can readers and fans find out more about your series?
Current and Upcoming Titles:
NO ONE LIVES TWICE (Carina Press/August 2010)*
NO ONE TO TRUST (Carina Press/June 2011)*
HER KILT-CLAD ROGUE (Carina Press/August 2011)
NO MONEY DOWN (Carina Press/June 2012)*
EDITOR’S CHOICE (VOLUME II) (Carina Press/June 2012)
THE THORN & THE THISTLE (Carina Press/January 2013)

Any other sites we can find you: https://notyourusualsuspects.blogspot.com 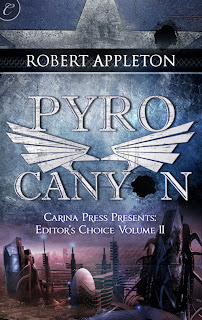 And it’s Corporal Gus Trillion’s job at the Propaganda Office to drum up recruits. But the colonists have heard one too many calls to arm to care. Disabled in battle and on the verge of burnout, Gus feels pretty apathetic himself–until his reporter friend Lyssa Baltacha stumbles upon top secret satellite footage indicating that the treacherous Sheikers are planning to invade human-occupied space. Now Gus and Lyssa must find a way to galvanize humanity to rise up against the enemy–before it’s too late…
37,000 words
Robert, what do you like best about writing a series?
I love the opportunity to delve deeper into this science fiction universe I’ve created. Unlike most series, each of my Cosmic Sparks books features a different protagonist, so the continuity is mostly through world-building and the occasional character connection. It’s an extremely liberating way to explore the future.
Who is your main character?
Not someone you’d pick to save the galaxy, to be honest. As a military cadet, Gus Trillion had a one-way ticket to the upper echelons of his profession; now, damaged, disillusioned and stuck in the propaganda office, he wants a refund. But war hasn’t finished with him yet, and he’s about to discover the importance of second chances.
If you could meet one of your characters who would it be and why?
I’d love to meet Cardie, the legendary female pilot turned politician whom Gus attempts to lure out of retirement to lead the colonial fleet. She’s pretending to be this dignified diplomat when in reality she’s still the same potty-mouthed, two-fisted flier from years ago. I think she’d be great fun to hang out with.
Do you have a favourite location/setting in your story?
Altimere is a lake several miles deep and has the width of a small country. It’s located in a colossal alien satellitle dish—long since abandoned, constructed with elements unknown to man—and has its own weather. Our outer colony command hub is built around its central reception tower. No one who visits Altimere ever forgets its majesty, or his/her swimwear.
***
Carina Press Presents: Editor’s Choice Volume II is available for purchase here on the Carina website, or anywhere ebooks are sold. The four novellas are also available individually.
To celebrate this release, we’re giving away a free digital copy of the anthology to one lucky commenter. Just leave a comment on this blog and we’ll pick the winner at random at the end of the week. One runner-up will also win a single novella of his/her choosing (from the anthology). Good luck!
And Happy Birthday, Carina!
« Worst Interview Ever (but a GREAT giveaway!)
Meet the men of Volume I »