More than one way to be a strong female character 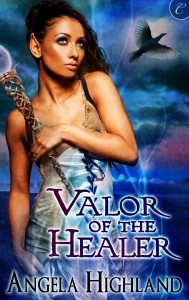 “Strong female characters”. It’s a phrase you hear over and over again in the urban fantasy and paranormal romance genres in publishing, not to mention in SF/F-based TV shows or movies. In honor of the release of my fantasy novel Valor of the Healer, I’d like to tell you about what “strong female character” means to me–and what challenges are presented when you want to write a character who might not fit the typical definition of “strong”.

And by “typical definition”, I mean physical strength and power. Nine times out of ten, when I hear “strong female character”, I hear “female character who’s a badass”. Maybe she’s a vampire slayer, like Buffy Summers, or a hunter of some other form of supernatural monster. Maybe she’s a soldier, or a mercenary, or a FBI agent or some other kind of spy. In all these cases, though, she’s generally physically competent. She can hold her own in combat, and she knows her way around one or more weapons. Frequently, she’ll have the attitude to back up or even surpass her physical abilities as well. Such a heroine will be outspoken, often sarcastic, and more often than not more so than is actually wise.

In Valor of the Healer, though, my character Faanshi at first glance is the exact opposite of “strong female character”. She starts the story in slavery, and she’s been brought up to be meek and submissive. Faanshi’s not even supposed to look a man in the eye, much less stand up to him. Fighting and combat are inherently frightening to her, given her powerful healing magic; her instinct is to mend pain, not to be the one handing it out. Moreover, even aside from the submissiveness drilled into her by slavery, I wanted her to be of a naturally gentle and compassionate temperament. I.e., not the sort of girl who’s likely to pick up the nearest sword and spill the blood of her enemies.

My challenge, therefore, was this: how could I write such a character to show that she did in fact have strength of her own?

The first answer to this lay in Faanshi’s religious faith. She’s been raised by her great-aunt Ulima in the worship of the goddess Djashtet, and she believes very, very strongly in her chosen deity–even though she’s surrounded by people who not only do not share her beliefs, but who also persecute half-bloods like her in the name of her own. As the story starts, Faanshi’s prayers to her goddess have arguably been the most important thing keeping her sane in the face of imprisonment by her master.

Hand in hand with this goes the second answer to the question of Faanshi’s strength: Ulima. The laws and customs of two different nations dictate that Ulima cannot help Faanshi openly, but this doesn’t stop her kinswoman from doing everything in her power to support her. And there’s a great deal of strength to be had in the knowledge that someone, even in the face of adversity, is looking out for you.

The third and most critical of all the ways I’ve tried to portray Faanshi’s strength is through giving her the power of choice in her life. To be presented with sudden freedom when you’ve known nothing but servitude is exhilirating–and terrifying. For the first time in her life, through the course of this story, my young healer must step up to the plate and learn to be the one in charge of her liberty, her destiny, and her magic. Portraying how she does this, while keeping true to her gentle nature and her strong moral core, has been one of the most satisfying writing challenges I’ve had to date. Her development as a character won’t end with the final chapter of Valor of the Healer–but I like to hope that as of the end of this part of my trilogy, I’ll have put her firmly on the road to being a young woman of agency, or, as the elven scout Alarrah calls her, “a free woman of the West”.

So how about you, readers? I’d love to hear about your favorite heroines who show their strength in unexpected ways, no matter what their genres. How is their courage tested? How do they conquer their fears?

Drop me a comment any time this week to tell me about your favorite strong female characters, and on Saturday, April 20th, I will give away a copy of Valor of the Healer to a randomly selected commenter! Or pick up a copy for yourself right here on CarinaPress.com!

And if you like the book, do please come and find me and tell me about it! Valor of the Healer is my first novel with Carina, but I also write under the name of Angela Korra’ti, and I’m Anna the Piper to my online friends. You can find me at angelahighland.com, on Twitter as @annathepiper, or on Facebook or Google+ as Angela Korra’ti. Thank you all!