Never Say Never (or How Fae’s Muse Runs Her Life) 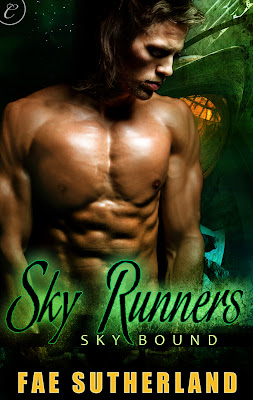 My latest Carina Press release, Sky Runners, is an out of this world adventure of sex, romance, space pirates and drug-running slavers, but it’s also the story of how stubborn, mouthy characters get their way.

See, when I started writing the first book in the Skybound series (Sky Riders), it was a one-off, a bit of fun playing in a new genre and that was all. However as I wrote it, I found myself more and more curious about not just the heroes of that story, but about the rest of the cast and crew as well.  Cookie (aka Killian O’Neal, Hero #1 of this week’s new release, Sky Runners) intrigued me to no end. Here was this good-natured roughneck who was obsessed with things like pictures of the long-gone Southwestern US with its pastel sunsets and majestic saguaro cacti, who was loyal and trust-worthy and just a really good man all around.  So what was he doing on board a pirate ship risking life and limb for a few credits? He seemed more the type to settle down on some newly terra-formed planet and live a quiet but happy sort of nondescript life involving babies and golden anniversaries.

Except as I poked around in his head (even though I was absolutely NOT going to write a sequel, nope nope. I was poking out of simple curiosity, or so I told myself) I discovered that Killian definitely had his reasons.  Reasons that provided my happy-go-lucky gentle giant a fascinating backstory I couldn’t ignore.

At which point I realized I was done for and yes, I would be writing his story. Fae’s Muse – 1, Fae – 0.  But what was his story?  That’s when another character– a much more minor character – entered the mix. Neith Harvoran was supposed to be nothing more than a very pretty young man who got himself tumbled by the blue-eyed devil hero, Rain, in book one of the Skybound series, Sky Riders. He had all of THREE lines in that book. That was all he was ever intended to have.  So of course he ended up Hero #2 of Sky Runners. Of course he did, because that is how my muse rolls – any way he pleases, with little regard for what I, the author, have planned. Fae’s Muse – 2, Fae – 0.

And while on the surface it would seem that a wealthy politician’s son with self-esteem issues and a roughneck space pirate with a heart the size of all of the In-Between would have nothing in common and be the unlikeliest of love stories, things are not always as they seem. Fate knows what she’s doing and while Neith might have been Rain’s throwaway one night stand, he just might be Killian’s happily ever after. I hope you will pick up a copy of Sky Runners today and find out how their story ends!  And did I mention that next month the last Crux Ansata crew member, ship mechanic Jeret, has his book released in the final installment of the Skybound series (Sky Hunter, coming July 22nd!)?  Fae’s Muse – 3, Fae – 0.

*sigh* This is becoming a pattern.

Crux Ansata second-in-command Killian O’Neal has a plan. The governor’s son, Neith, has been enslaved in a high-end brothel. Killian’s going to break him out, take him home and collect a reward. It’s a daring mercenary rescue. What could go wrong?

A lot, as it turns out. The governor doesn’t want his son back, the ship and crew are on the run from the slavers, and Neith is in withdrawal from a drug that instills in him a desperate lust.

A passionate heat flares between Killian and Neith–but is it just the effects of the drugs still in Neith’s system, or could it be something more permanent? They both need time to figure out if what they have is real–but Neith has taken a valuable item from his old masters and they’re not going to let him go easily. When the slavers catch up with the Ansata, Killian will have to choose between the safety of his ship and its crew, or life with the man he’s falling in love with.

Check out the first book in the series: Available Here

And keep your eye out for the third and final Skybound book, Sky Hunter, coming next month!

Fae Sutherland has always dreamed of being a published author, starting her writing career off at age 11 with a series of stories she charged her classmates a dollar to read. She has since progressed to more serious writing, though always keeping that dash of irreverence and fun (and a hell of a lot more heat!). Also, she charges just slightly more than a dollar now.

Fae is perhaps best known for her books co-written with fellow M/M romance aficionado, Marguerite Labbe. Together they are the authors of over a dozen novels, novellas and short stories. Currently, Fae is focusing on solo work and has a multitude of upcoming books in the pipeline.

When Fae’s not working on new stories to make her readers sweat, she loves website design, spending too much time on Twitter, and watching oodles of Food Network with her beloved life partner. If there’s any time left over, it’s spent snuggling the cat.