My mother was a good cook, a sublime baker, and a gifted seamstress whose quilts and smocked baby dresses especially were true works of art. And when I was a kid, I wanted nothing to do with any of those skills. I loved Mom, but our personalities contrasted (and during my adolescence, clashed), so I was desperate to prove I wasn’t her.

Still, in 7th grade I found myself taking HomeEc as an elective, mostly because I didn’t quite have the nerve to take Shop instead. The classes weren’t officially sex-segregated anymore, but no boys took HomeEc my year, and as best as I can recall no girls took Shop, either. I walked into class the first day full of dread. Yet much to my own surprise, I discovered that cooking was tremendous fun and that I had a knack for it. I didn’t quite become the kitchen helper and apprentice cook I’m sure my mom had dreamed her only daughter would be, but from then on I spent regular weekend afternoons in the kitchen baking cookies and making fudge. And once I was grown and living on my own, I taught myself cooking in earnest. Now my cookbook shelf is almost as packed as my Regency and Napoleonic Wars research shelf. I love challenging myself with new recipes, and I bask in the praise my family, friends, and coworkers bestow upon my culinary mojo.

But that’s not the whole story of my HomeEc experience. You see, we also had to do sewing projects. I made an 82 on mine. I know, that sounds like a pretty good grade–until I tell you that the lowest grade any of my girlfriends got was a 98. So I’m pretty sure that 82 would’ve translated to a 62 or even a 52 in an academic subject. Mind you, I fully deserved that bad grade. My cushion was ugly and sloppy, and I hated every minute I spent on it. Many years later, I still don’t have a single crafty skill–give me a needle or a paintbrush, and all the deftness with which my hands separate eggs or work biscuit dough dissolves into utter clumsiness, tense and frustrated. Every once in awhile friends suggest that I take up knitting. “It’s so relaxing!” they tell me, and I have to explain that to me it’s about as relaxing as going to the dentist or sitting in rush hour traffic.

What does any of this have to do with my new release, A Dream Defiant? Well, my heroine, Rose Merrifield, is a gifted cook. At the start of the story, she’s following the drum with her soldier husband. Her fireside is a popular place in her husband’s company because she can make delicious meals out of oddly assorted ingredients with a skill that would’ve made her a Chopped champion if she’d been born 200 years later, and she earns money on the side cooking for the regiment’s senior officers. But she’s always dreamed of more, of owning her home village’s one inn and making its kitchen a place travelers will stop to linger.

I realized after the fact that I could’ve just as well made her a gifted seamstress with dreams of setting up shop as a modiste, but it never occurred to me to do so. And then I noticed a common thread in all my heroines–though they’re not based on me in any direct way, I’ve given them all at least one of my interests. Elizabeth in An Infamous Marriage is a bookworm who longs to travel and see the world. Anna in The Sergeant’s Lady loves to sing, and I made her an alto, like I am. And while Lucy in A Marriage of Inconvenience has a gift for painting and drawing despite the fact I can barely draw stick people, I made her musical too, and she hates to sew and work embroidery. I didn’t consciously choose to give my heroines those pieces of myself, but I suppose it’s a form of Write What You Know.

What about you? For the writers among you, what pieces of yourself do you put into your heroes and heroines? And for the readers, do you find yourself drawn to characters who share your skills and interests? 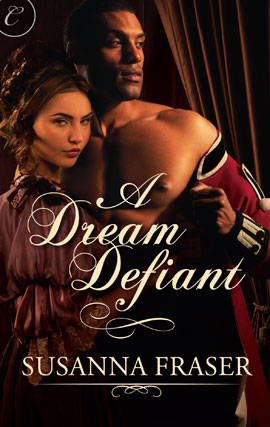 Elijah Cameron, the son of runaway slaves, has spent his whole life in the British army proving that a black man can be as good a soldier as a white man. After a victory over the French, Elijah promises one of his dying men that he will deliver a scavenged ruby necklace to his wife, Rose, a woman Elijah has admired for years.

Elijah feels bound to protect her and knows a widow with a fortune in jewels will be a target. Rose dreams of using the necklace to return to England, but after a violent attack, she realizes that she needs Elijah’s help to make the journey safely.

Her appreciation for Elijah’s strength and integrity soon turns into love, but he doubts she could want a life with him, knowing the challenges they’d face. As their relationship grows, she must convince Elijah that she wants him as more than a bodyguard. And she must prove that their love can overcome all obstacles, no matter the color of their skin.

Susanna Fraser has been writing since the age of 9. Her youthful efforts featured talking horses, but she now writes Regency-set historicals with a focus on the soldiers who fought the Napoleonic Wars.

A native of Alabama, she never lost her love for barbecue or stopped saying “y’all” as life took her to Philadelphia, England and Seattle, where she lives with her husband and daughter.

« The Best Laid Plans
Historical Heroes and Heroines in the Crosshairs »