Slam Dance with the Devil – Are Rock-and-Roll Legends True?

Rock & roll has spawned a lot of legends. Rock stars have to be larger than life in order to fill the stage and get their music heard. We’ve all heard stories of the wild parties, wrecked hotel rooms, and bizarre contract riders (only green M&Ms allowed). But what about the other legends, the unsubstantiated rumors that surround some stars?

What if I told you some rock stars were really demons who fed on the energy of the audience? Would that change the way you thought of rocker Kent Gaol’s late night bacchanals? He’s the hero of the second Demon Rock book, Slam Dance with the Devil, and his legends go back much further than private investigator Nona Harris could imagine. 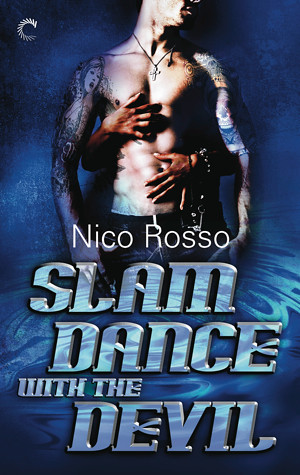 All those wild rock stars you hear about? Some of them really are demons, sustained by the energy pouring off the audience…

Wild, destructive and immortal, rocker Kent Gaol has given up the search for his Muse—a demon’s one true source of inspiration, his forever partner. After losing the one woman he thought might be his, he’s convinced she doesn’t exist.

Hard-as-nails private investigator Nona Harris has been hired by a mysterious client to track Kent. She knows nothing of his truths, until one night when Kent tricks her on stage during one of his concerts. Amazingly, she not only senses the energy around the demons, she feeds from it…and it turns her on.

Kent never expected Nona’s response to be so intense, nor that she could enter his world and so thoroughly rock it. This is beyond a tumultuous love affair—this is a sexual and emotional bond that will change them both forever. A bond strong enough that now Nona’s shady client wants them both dead…

When I was younger, we didn’t have the Internet, so rock star tall tales were spread by word of mouth. Here are some I remember, and some I’ve read about. Are they true?

To find out the answer on the last one, we might ask Kent Gaol. In one of his past incarnations he was also a blues man. A heartbreak from those days has been shaking his life for years and threatens to destroy the growing attraction between Kent and Nona as their worlds are slammed together.

So what are some of the rock and roll legends and fables you’ve heard? Give us some of the lore in the comments and one person will be randomly selected to win a $20 Amazon gift card (for rock and roll – of course).

Thanks for stopping by. You can find Slam Dance with the Devil here.
And if you want to keep the conversation going, you can find me on:
Twitter
Facebook
NicoRosso.com

9 thoughts on “Slam Dance with the Devil – Are Rock-and-Roll Legends True?”